Mental illness, healing, and the life of the Spirit: part 1

Very recently a Friend posted this quotation from Richard Rohr, which I find (somehow) speaks to what you are saying:

It is really shocking how little Jesus is shocked by human failure and sin. In fact, it never appears that he is upset at sinners at all. He is only and consistently upset at people who do not think they are sinners. This momentous insight puts him centuries ahead of modern psychology and right at the center of rare but authentic religion. So much so, that most of Christianity itself never notices or addresses this pattern. It is an “inconvenient truth.”

I’m not equating sin with mental illness - they are not the same thing. There are times perhaps when they overlap - or we think they do - and that can lead to painful and tragic self-blame. But there are two things that seem to me to tie this statement with yours. The first is that these are common, shared human experiences we are talking about. At best we are all wounded healers; at best we are all repentant sinners. We have no more right to claim to have “mental health”and therefore not in need of healing then we have a right to claim redemption without repentance. What would “mental health” in this sick, sad world look like, exactly? If “adjustment” to a broken, fallen world is mental health, then I say to hell with it. Better to live with lamentation, to be a stranger in a strange land, to wander in the wilderness, where we know God will find us - because we are looking for Him.

This is also not to say personal experiences with the debilitating effects of mental illness are not devastating. I know they can be, and often are.

The second thing that I think connects Rohr’s insights to yours is that both seem to say that where brokenness is, God is. “Those who are well have no need a physician, but those who are sick.” I have just recently taken notice of how much of the Gospels is taken up with the stories of Jesus’ healing. I think I totally missed the importance of this for so many years when I thought those stories were about miracles, or power, or something other than an earth-shattering statement about what is important to God. In our brokenness, God seeks our healing. You might even say it is a Gift.

Thank you, Randy. For al of this, but perhaps especially for lifting up the ways in which adjustment may not be the same thing as health or faithfulness.

I have been grateful for the many healing stories in the Gospel, and have often found that lines from them seem to speak directly to my condition: "Do you want to be well?" "My name is Legion, for we are many..." "Lord, I believe; help thou my unbelief!"

"If I am annoyed with them for complicating my life, if I am trying to prove how different I am from them, or if I am desperate for them to like me, need me or be helped by me, I am more likely to do harm than good."

Thank you for this. I have had the unfortunate experience of Friends becoming over-involved in my health care choices. I have struggled with friends who want to "help me get the help I need" when I have in fact been part of the mental health care system for over a decade and have never been out of compliance. It was a traumatizing experience. I don't think people understand the ham that they do in trying to fix people. I think I am a whole and complete person and don't come to Meeting in search of relief from mental trauma. I have a right to experience the world and my God in a way that might be different from others. I appreciate your post and I look forward to reading the next one. My (currently dormant) about madness and faith may interest you: I will update it soon.

Sorry I lost the end of my comment: My currently dormant blog is about madness and faith. aholyandabrokenhallelujah.wordpress.com I will be updating it soon.

Kitt, thank you for writing so thoughtfully and openly. I hear you about the right to experience reality and God differently. I believe in that right. And I get confused because I do believe that many legitimate and wholesome differences are labeled as sick or wrong by our culture, and also that there is real sickness of the mind as well as the body, and that this can require care and limits...my next blog post will be a partial attempt to wrestle out that paradox.

Thank you for the link to your blog. I look forward to reading it. I want to get the post which I have been composing in my head this week while working in the garden written down first, before diving into the new ideas and questions you'll offer...but thank you. 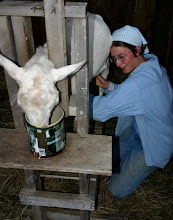